What is Bill of Lading (BOL) in Freight Shipping 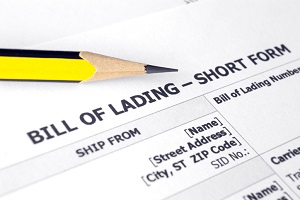 If you’ve used freight shipping before then you’ve probably heard the term “BOL.” You’re probably wondering, “What does BOL stand for?” The BOL acronym is short for “bill of lading,” and it’s an official document used for virtually all freight shipments.

Here at FreightRun, we’re not just about connecting people with quality shipping providers. We also want to educate our customers to allow them to have a better shipping experience.

The more people understand a service, the more they’ll enjoy it. We hope that by thoroughly educating you about freight shipping we’ll supply you with the tools you need to transport your skids or crates with the utmost efficiency.

With that in mind, we’ve put together this comprehensive guide on bill of lading forms. You’ll learn what they are, what they’re used for, and how they can help you during the shipping process.

Keep reading to learn everything you need to know on this important legal document.

Lot’s of people ask us “what is bill of lading?” or “what does BOL mean in shipping?” Basically, it is the document provides a detailed list of the goods being shipped. It’s also a binding agreement between the shipper and the consignee. It includes all the details necessary for the carrier to process your package and ensure it arrives to you safely.

The process starts by the shipper filling in a blank bill of lading. Once a shipment is issued an original bill of lading it can be released to the carrier to be shipped.

What is a Bill of Lading Number

Along with your BOL, you’ll also get a BOL number. This is a type of purchase order number. It’s a unique identifying number for your package and is used to help track it throughout the shipment. It doesn’t matter whether you're sending something big or small, urgent or unimportant. Everyone wants to be able to track their package. This number will let you do that.

The bill of lading number format can vary depending on a number of factors. The number should be clearly visible on your form.

What’s the Difference Between a BOL and a Freight Bill

This is another common question people ask in regards to bills of lading and while shipping Less than Truckload freight on Common Carriers . The Freight Bill is the Invoice from the Carrier or the 3PL for the freight charges.  Still, a driver arriving at a shipper after they show him/her the freight they are shipping might say "and where are the bills?" by which he means where is the bill of lading - he does not mean where is the Freight Invoice as drivers normally never see a Freight Invoice.  Others may use "freight bill" as synonymous with "bill of lading" as a bill of lading is for freight; but this is mostly an anachronism from the days when freight mostly ran over the railroads.  Today, in common parlance between drivers, their dispatchers, 3pls, shippers and receivers  "freight bill" means "freight invoice" and "bills of lading" can be "bols."  In the days when the railroad was king, "freight bills" and "bols" may  have been interchangeable but no longer; to avoid misunderstandings avoid saying "freight bill" when you mean "bills of lading" or  "bol."

While “bill of lading” is the more official term, many in the industry still refer to a BOL as a freight bill.

What Do You Need to Know About a Bill of Lading

After people get the answer to “What does bill of lading mean?” the next thing they ask is “What do I need to know?

Your BOL will contain lots of important information about your package. You'll be able to see the address it was shipped from, the address it's supposed to be delivered to, the total weight of the package, it's freight class, and the type of good that are being shipped. Some directions that should be followed while delivering the package may also be included.

Bill of lading rules and regulations agreed to between you and your carrier are generally included in the form as well. However, some packages will also include a short form bill of lading, which excludes these terms and conditions.

Bill of lading requirements set out by the DOT state that a BOL must be included in order to ship anything.

Common Uses for a Bill of Lading

The shipping bill of lading serves three main purposes throughout the shipping process.

Who Issues the Bill of Lading

The BOL for a package is issued by the carrier (or the freight broker on behalf of the carrier). The carrier is the entity in charge of transporting your package and ensuring it is delivered to you safely and on time.

Because of this, a bill of lading is beneficial for both parties.

Types of Bills of Lading

There are many different variations when it comes to bills of lading. For the purposes of this article, we have summarized the most common types of BOL for you to review.

FreightRun is Here to Help You With Your Shipping Needs

Whether you have questions about freight shipping, or you’re looking for a quality shipping provider, FreightRun is here to help. Use our free quote tool to quickly find the lowest price for your shipment, or contact us for more information about our services.

Offer available for new clients only and expires after 15 days from account creation. Discount will be applied to your first LTL shipment. Discount does not apply to Volume, Custom Quotes or FTL shipment