Offer available for new clients only and expires after 15 days from account creation. Discount will be applied to your first LTL shipment. Discount does not apply to Parcel, Volume, Custom Quotes or FTL shipment

Oversize and Wide Loads Regulations in 2019

If you are sending products across the U.S. that require an oversize load, it's important to understand the shipping laws for every state your truck drives through.

Oversize loads are a common occurrence on today’s roads, and these loads are subject to different laws and regulations in each state. That’s why we’ve compiled all the essential information for wide loads in this complete guide to oversize load restrictions.

With our help, you can ship your oversize load with confidence anywhere in the United States.

What is an Oversize Load

An oversize or wide load vehicle is generally defined as a vehicle that is carrying a load wider than 8’5” (a standard truck bed width is 8’).

However, a load can also be “oversize” based on the weight, length or height of the cargo. The maximum height allowed by oversize load regulations is generally the same across the United States.

Most states agree that an oversize vehicle shouldn’t be taller than 14’6”. The length and weight limitations for oversize loads vary by state, so you’ll need to check state requirements before sending a long or especially heavy shipment. 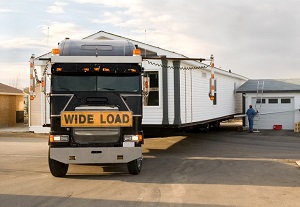 Despite disagreements about wide load definitions and restrictions for overweight loads, one thing that is true across all 50 states is that wide loads need a permit to hit the road. Even if your truck meets legal requirements for most dimensions, if it’s too wide, or long, or heavy, you’ll be required to obtain a permit. Plus, you’ll have to get a separate permit for each state your freight will travel through.

In addition to a permit, your truck may be required to have an escort vehicle. Escort or pilot cars are passenger cars that travel with a wide load to protect both the truck and other cars on the road. Most states only require escorts for loads that are over 10 or 12 ft. wide, but a few states require pilot vehicles for all wide loads. Depending on the size of your wide load truck, and the state you’re driving through, either one or two escort cars may be required; For loads that are more than 10’ wide, many states require 2 pilot cars: one car in front, and one as a rear pilot.

Pilot car drivers are responsible for alerting other cars to the presence of a wide load, as well as making sure the truck can travel through traffic safely. A pilot car traveling in front of a wide load also alerts the truck driver of oncoming traffic for turns, makes sure it is safe for the wide load to switch lanes, and stops other cars from passing oversize load trucks when it’s not safe.

If the oversize load is entering a congested area, or any situation where there may be danger to any vehicle, pilot car drivers are also permitted to stop traffic in order to guide the truck driver safely to their destination. 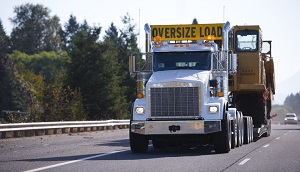 It is important that all cars on the road are alerted to an oversize load, even if the truck isn’t accompanied by an escort so most states also require oversize loads to have extra safety equipment such as lights, flags and load banners.

Most states require any oversize load to have a load banner, which is a yellow and black banner with the words “WIDE LOAD” or “OVERSIZE LOAD” printed in bold letters, on both the front and back of the freight. An oversize truckload must also have an 18” square red or orange flag at each “wide” corner of the load (anywhere the load is wider than the truck bed).

If your shipment has permission to be on the roads at night, the truck will also need to have lights in the same spots as the flags. You should also keep these lights on during periods of low visibility, like during snow or rains storms. Some states require yet another light, either flashing or rotating, on top of the truck cab. When the truck is not on the road, all warning equipment must be removed.

When Can I Drive an Oversize Load

Before scheduling an oversize load delivery, you’ll also want to check the oversize load holiday restrictions by state for each state you’ll be driving through. Most states will not allow oversize trucks to drive on weekends or during holidays, and oversize loads will be required to get off the road by noon the day before the holiday begins.

Again, these oversize road restrictions stem from safety concerns during more congested traffic times, so it is extra important to be sure you are only driving during legal oversize load driving times. Driving outside of the permitted times is considered a violation of your oversize load permit, and you may be subject to a fine.

Every State has a different definition for an oversize, and different oversize load limits for trucks on their roads.

To ensure that your shipment meets all requirements for your shipping route, click on the links below to see oversize load regulations by state:

We can cover your LTL or FTL loads for flatbeds, Reefers (refrigerated), Vans, Lowboy, smaller Box Trucks, and other specialized equipment. Call us today to price your specific needs!

Get A Freight Quote

Offer available for new clients only and expires after 15 days from account creation. Discount will be applied to your first LTL shipment. Discount does not apply to Volume, Custom Quotes, FTL, nor Parcel shipments.